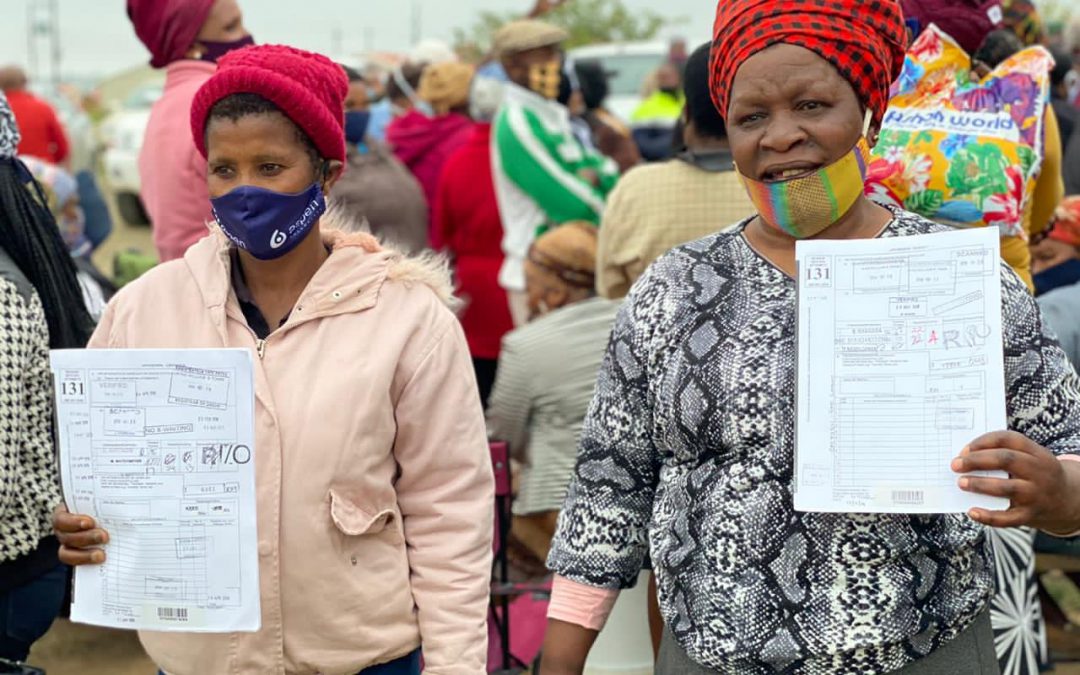 “My life has changed ever since I moved from the shack I was staying in, this is a real house no rain comes in here, I am at peace now because this document proves this is my house.” These are the heartfelt words from 76-year-old Florence Zilinkomo, when she received her title deed at her house from EC MEC of Human Settlements, Ms Nokqubela Pieters on 17 November 2020. She was part of the 291 beneficiaries in Reeston, Buffalo City Metropolitan Municipality (BCMM), who received their title deeds in the many efforts by the Department of restoring South African citizen’s dignity.

The MEC visited some of the elderly beneficiaries in their homes to personally handover their title deeds. “This is a security of tenure we are giving the people showing these houses and the land they are built on belong to them, nobody else can take that from them. We have come here to restore their dignity,” said MEC Pieters. The other beneficiaries gathered at the New Life Community Hall in Reeston where they received their title deeds. The Department together with the BCMM undertook a verification process to ensure the rightful beneficiaries receive their title deeds. The other beneficiary is 82-year-old Polota Notshundwana who lives with her 2 grandchildren. “I want to thank government for my house and this title deed,” said Notshundwana.

The recipients all benefitted from the Reeston Phase 3, Stage 3 housing project. The entire project has 930 houses which were implemented in phases. Issuing of title deeds is one of the Department’s priorities ensuring that beneficiaries can legally own their properties. The Department has been confronted with the huge backlog on the issuance of title deeds in the Province. This was brought about by numerous historical pre- conveyancing challenges at most of the municipalities.

The Department has since put interventions to address some of these challenges and upscaled the issuance of title deeds. These include unlocking the pre-conveyancing activities that were delaying registration of title deeds by redressing the poorly planned urban developments and put in place general plans, township establishments, and township registers to accelerate registration of title deeds. The other intervention was to issue the title deeds to the beneficiaries that were already registered by municipalities when they were developers but were never issued.